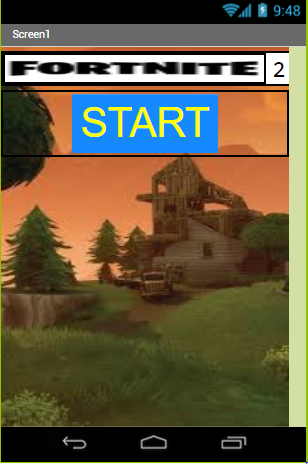 The game is Fortnite 2. In this game you begin in a start screen before you begin the game.

After pressing start, the user is redirected to the game screen where the game may begin.

The game screen contains an image sprite that is your character.

A bullet is positioned on the right

Side of the scree, but will not move

Until the image sprite jumps.

But when the canvas is touched

The character will jump and the bullet

If the pause button is pressed, the game will stop, and progress to the score will be saved. A character selection appears and after pressing what image you would like to play as, it will change your character to that specific image. After selecting the character, the game will resume.

After the game is lost, the bullet stops and a start button appears. After the button is pressed, the game will start again the the score will reset back to 0.